4.2 The Live in Concert album

The following timeline present elements from the live album, focusing on the cultural meetings, compositions and performances situated within the artistic practice.

The concert took place in the main concert hall at Kilden Performing Arts Centre, in Kristiansand, Norway, March 25th 2015. As described in 3.4 this production was extensive. I was the main project leader and musical director involved in all parts of the planning, down to details like ordering airfare tickets and writing visa grant letters. As different time zones involved availability at all hours I wanted to follow up the musicians and artists personally to make sure formalities did not prevent them from attending. The participants were:

Through mutual friends, I got in touch with traditional Lebanese singer Abeer Nehme in November 2014 about a possible collaboration. I had been fascinated by her amazing voice and ornamentations for a long time. We met up in late January 2015 in a studio in Jounieh, a small costal village in Lebanon. I suggested that we start improvising together right away, instead of the usual Arabic custom of polite conversations in getting to know each other. Abeer was up for the challenge, although she responded that this was a bit unusual. I set up my laptop with a software plug-in piano sound connected to a MIDI controller keyboard, iTalk-app in record mode, and we started improvising together.

I provided some chords, and had a couple of themes that I suggested we play around with. This was not optimal. I then added a pad sound under the piano to create more open sustained harmonies, thereby letting Abeer absorb those and respond to them before changing and evolving the root key. This worked better, as she now had more freedom to decide a path of her own. I responded reharmonizing along with her voice, thus sometimes indicating a melody that she picked up on and elaborated or vice versa. After some minutes, a special moment of musical connection occurred totally improvised and harmonized on the spot.

Back at my hotel, I imported the audio files from the rehearsal into Logic, and cut it into small pieces by identifying small parts that could be further developed into a full melody, combining methods from arranging, composing and producing.

The day after we meet up in the evening in Byblos city, where her brother had an apartment we could work in. I needed to record Abeer’s voice a cappella so I could make new arrangements with the melodies without being locked in on my original harmonic structure in the iTalk App recordings. Due to a shortage of time, we did not get through all the themes since I had to catch a 4 am flight. It was an amazing feeling driving at night down the Lebanese coast with the taxi driver who got lost in Beirut, and me without any sense of direction trying to find out where the hotel was.

When improvising in traditional Arabic music, the Arabic orchestra provides a pedal tone with nay or qanun responding or commenting on the vocal ornamentations. I work differently to emphasize harmonic and structural changes not rooted in one tone, both when improvising and in compositions. This is a different approach as you can hear from the audio example. It sets another form of communication, and provides more opportunities of interaction.

Back in Norway, I developed a structure of intro, verse and refrain, and then started arranging and orchestrating the composition. 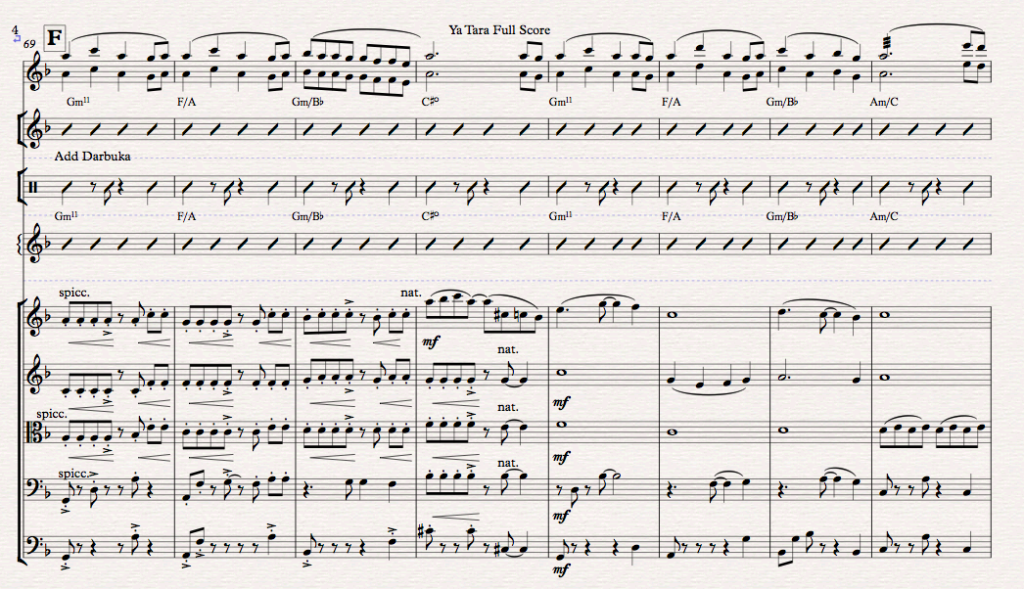 Here is an excerpt where you can see that the strings and double bass are written in detail, and the traditional instruments and guitar with more freedom. Because I play the piano part, I do not write detailed voicings in my style. I know that Knut Ingolf adapts his voicings on the guitar when listening to mine in the rehearsals. I also like him to have the freedom to choose since there are many ways that a chord can be played, and I trust his judgement. The same goes for Rony on Arabic percussion. I suggest a basic rhythm, and he makes it better or changes it with his amazing ear and attention to detail. Elie and Feras ornament the melodic lines as they wish. It is their privilege, as their sound signature is in their ornamentation. Listen to the instrumental part and Oud solo in the timeline.

The intro with oud taksim had a cello playing an A pedal note chosen by Elie. The taksim is open in length and Elie gave a cue towards the end, moving into the piano and vocal part in the key of C. When the verse repeats the string orchestra is introduced, followed by the rest of the instruments in the refrain. Elie is an excellent master of both bud and buzuq, and when he asked me how long the taksim should be I said it was his decision, and not mine, as it was his moment. For the record we had to cut down on the intro, although this raises an ethical issue of editing an artistic performance. The edits were done with a focus on musicality, and fitted to his style of playing so that it still had the natural feel. This meant letting the phrases or musical lines play out and cutting parts out, rather than certain notes. In a live concert setting, the mood often allows for longer solos, hence taking the audience on a journey. In the process of mixing, I did consider publishing the full intro as a separate track and then the song, since they belong together and online streaming platforms like Spotify do not necessarily put the tracks after each other like on a CD. It makes these decisions difficult, and in the end I had to consider the entire composition.

Choosing the key and structure was in collaboration with Abeer, communicating through WhatsApp, where you can send voice messages. In one month, we had several hundred messages back and forth. The shortage of time and distance prohibited meetings in person, which is always an advantage when working together for the first time. I admire Abeer’s focus and determination musically, and very much appreciated the effort she dedicated to this project. Still, there were a lot of misunderstandings along the way on both ends since we had a different approach on how to do things, along with cultural differences as well. Because combining complex harmonies with instrumental elements is unusual in The Middle East it was not easy to illustrate this with audio sketches from Logic without vocals. Advocating for the importance of complex harmonies was challenging since I could not provide a sufficient soundscape inside Logic with incomplete sketches. I could only show this at the rehearsal with the orchestra.

Arriving at the rehearsal two days before the concert was the first time Abeer heard the full arrangement and orchestration, and we only had 20 minutes for rehearsal the first night and 10 minutes the following day. In Norway, classical orchestras have a very good labour union and many administrative routines. In Lebanon the orchestra will stay as long as the vocalists want, but in Norway they have a strict time schedule that if extended by one minute triggers an overtime payment for all the musicians in the orchestra. The lyrics were written by Lucas Sakr and needed some small adjustments to fit the melody, so Abeer and I rehearsed with piano and vocal alone for one hour in the evening. Abeer had some breathtakingly beautiful ornamentations that I wanted to lock into certain places in the melody, but she argued that her ornamentations were emotionally connected and changed or varied for each performance, and it was of course her privilege to do so.

It took some time to get the recorded tracks from the KSO, since their committee had to approve the artistic quality of the string orchestra. After mixing the album, I sent it to the committee again for their approval for publication.

Because both Abeer and I had been so involved in all the different stages of the tune from improvisation to the finished song, the copyrights were unclear. We were entangled in this, and trying to find out how to solve it. We agreed that I would keep the rights for the specific recorded version, and that she would get all the rights for the tune in the future.

We kept in contact and found time to meet again at J.P. Studios in Jounieh for three days in May 2017 for three days of improvising and writing new tunes. Our musical project is ongoing, but the challenge of working in different parts of the world is to dedicate enough time to follow up with all of the different projects. Abeer is one of my favourite Arabic vocalists, and has a strong sound signature with a wide range of styles and music traditions.

I composed “Too Close” (2014a, 2014b, 2015b, 2019) in one of my many journeys to Cambodia. Vocalist and colleague Hilde Norbakken wrote the original English lyrics for this tune, which was first recorded for our duo album Open Doors (2014a) in Rainbow Studio with sound engineer Jan Erik Kongshaug (ECM, Pat Metheny).

Ouch Savy did a Khmer translation first published in the Asian Flow (2014b) album, and Layale Nehme wrote the Arabic lyrics for the concert. At the rehearsal, Abeer, Savy and Hilde divided the parts between themselves. Collaborating with female vocalists has raised culture-related concerns of normativity and gender as previously discussed in chapter 1.3.

For the first time (in the world?) we would hear Arabic, Khmer and English together in this tune. How does the melody sound with these different languages? How do we listen to music when we do not understand the language? Listen and decide yourself: